IT IS MANDATORY TO RING THE CLINIC BEFORE SEEING A GP SO THAT THE CLINIC CAN BE PREPARED. PLEASE CLICK HERE FOR INFORMATION ON COVID19 TELEPHONE CONSULTATION WITH OUR DOCTOR.

In accordance with current Australian Public Health advice, Revita Medical Clinic requests that any individuals who start experiencing respiratory symptoms (fever, cough, difficulty breathing) and have recently travelled ANYWHERE INTERNATIONALLY or had contact with someone diagnosed with the novel coronavirus within the last 14 days call the medical centre or hospital before arrival so that the appropriate infection control measures can be put in place and people can be directed to the best place for testing and treatment.

WHERE CAN I GET MORE INFORMATION?

Ecezma, better known as atopic dermatitis as a global prevalence which affects between  2% to 21% of individuals. Inflammation of the skin is a hallmark of this condition with an array of innate and acquired immune defenses being involved. Innate immune defenses are the defenses we are born with and acquired are the defenses we develop over time.   In atopic dermatitis there is IgE produced in excessive amounts which occurs as a response to common environmental allergens i.e. pollen and dust.  IgE are antibodies, which the immune system produces. If you have an allergy, the immune system reacts to this allergy by producing IgE. These antibodies will cause an allergic reaction by travelling to the cells that release chemicals. 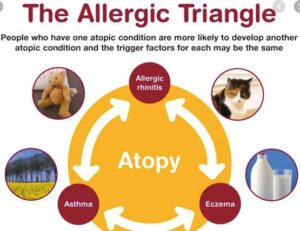 Those with atopic tendencies may also develop one or more of the other atopic conditions such as asthma or hayfever (allergic rhinitis). There is also a link between anaphylaxis and Ecezma. There is also believed to be a strong genetic component with development of this condition, however even if no parent has the condition children/individuals can still have Ecezma/ Atopic Dermatitis. It is 75% more likely though that if both parents have the condition that the child will develop it.

Atopic Dermatitis/ Ecemza onset is usually three months of age with 15-30% of children affected. 75% of cases will resolve prior to the child reaching six months of age. 80-90%  of cases will resolve before the child reaches 5 years of age. in some cases however, this condition can persist into adulthood with 2-10% of the adult population affected still.  Although onset is usually at that three months of age mark, it can occur at any age with it actually being delayed in some cases until childhood or even adulthood. The way that Ecezma appears will vary with age but overall it presents with key features of dryness and some redness. 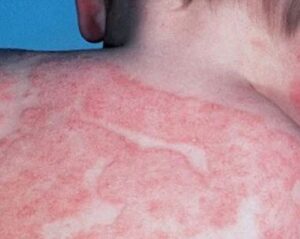 In Infancy à This period ranges from the first 2 months of a child’s life to 15 months of age.  Ecezma will appear vesicular and weeping. The lesions often will start on the face and elsewhere. The diaper region is extremely prone to Ecezma lesions.

In childhood à This period ranges from 16 months of age right through to 12 years of age.  Ecezma/Atopic Dermatitis  lesions will become leathery, dry and excoriated (From scratching). The lesions mainly appear on the elbow, knee flexures, wrist and ankles.

In  à The distribution of the Ecezma/ Atopic Dermatitis lesions is the same as it is within childhood with marked tendency towards lichenification (thickened leathery skin). The lesions tend to be more widespread with low-grade involvement of the trunk, face and hands. 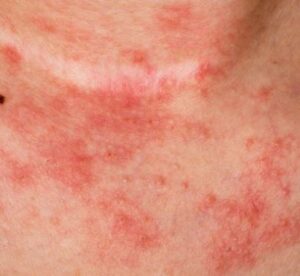 The key features that are present within all these forms of atopic dermatitis is itching, thickened skin, oedema (swelling) and to some extent redness in the epidermis (the top layer of the skin).   Those affected may have poor sleep quality. Children in particular may appear to be more hyperactive. In times of stress, it is likely that a flare up of Ecezma will occur.

Treatment for this condition can include usage of emollients, topical medical creams, phototherapy and avoiding exacerbating triggers. Emollients should be used daily and generously. These help repair skin barrier defects and possess anti-inflammatory properties. They are better known as moisturizers.   Not all emollients are suited for atopic/eczema skin, which is where we here at Revita Medical and Skin Clinic come in. We have a range of moisturizers available which are designed to ease the discomfort  and help in the hydration of eczema prone skin.

It is important to avoid exacerbating triggers when it comes to atopic dermatitis/ eczema.  Irritants such as woolen clothing next to the skin, soaps and detergents should  be avoided. Strong soaps can be irritating and impair the skin barrier and worsening eczema. Temperature extremes can also be a trigger for sufferers. Be mindful of exposure to potential  irritants in professions such a hair dressing and engineering.   Adding oils to baths may also be helpful in the managing the eczema lesions.  Corticosteroids or other creams may be prescribed by our doctors to help with the itch and appearance of the lesions.